Finish Selecting Your Vehicle to Shop For Your Turn Signal

Choose a Year for your Saturn 's Turn Signal

We stock Turn Signal parts for most Saturn models, including . 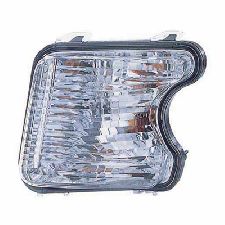 My son has a 96 Saturn S1.Coming home last night the indicator on the dash for the turn signals quit working.Turn signals are still working fine but not the little lights that blink on the dash.Always worked before..Havent had time to look at it but hard to believe both right and left went out the same time..I can hear the blinker working and I know the outside front and rear markers are working.Whats up

Do the indicators work when you have the hazards on?

So I have a 2004 Saturn-ion 2 . Within the last month or so I noticed that randomly out of nowhere my blinkers would start blinking fast as if the bulbs were out. After turning my car on and off I realized they were working fine again. Then the back light behind the speedometer, gear indicators and ac controls started going black randomly. It doesn't always happen, it happens completely randomly sometimes days or hours apart. When the front blinkers begin blinking fast, the front blinkers stop working but back blinkers work fine. Usually I'm driving and all of a sudden they just stop working and later it's fine again. I brought it to my friend the mechanic and he said it could be a million things and he's not really sure where to start.

Also, I should add when the back light behind the speedometer, ac, gear indicators goes black everything else still works. For example, the speedometer and ac functions fine it's just the backlight goes off so at night I can't see how fast I'm driving.

Here is a (TSB) Technical Service Bulletin that MAY apply for your turn signal concern....

This bulletin is being revised to add model years. Please discard Corporate Bulletin Number 03-08-42-009A (Section 03 -- Body and Accessories). Condition
Some customers may comment that one or both front turn signals are operating erratically. They may also comment that the corresponding rear turn signal and turn signal indicator in the I/P cluster flashes twice as fast. The lamps will come back on when the ignition is cycled to "OFF" and then to "RUN" but may still go off again. Cause
Important Not all chargers create the amount of noise necessary to cause this concern. Use of a different charger may eliminate the concern.
This condition may be caused by the use of a charger in either the front or rear accessory outlet. Some chargers can create excessive noise through the power line between the accessory outlet and the Integrated Body Control Module (IBCM) where the power fuses are located. The amount of noise from the charger can vary depending on the state of charge of the receiving device (less noise when the device is near full charge capacity) or type of charger. Just having the charger installed in the accessory power outlet without a device attached to it should not cause the lamps to go out. Correction
Install 220-microfarad 35V capacitor, P/N 10395194, in the wiring of the affected outlets.

AHH YOUR SO RIGHT. I just tried it today and 4 times in a row the blinkers started going erratic when I connected my phone to the outlet charger. Is there a fix for this?


See if your mechanic friend can get a copy of the TSB ..it has instructions on how to install the capacitor....

Thanks for your response! I wish it was that simple though but it seems to happen regardless of anything in the outlet.ni rarely charge my phone in my car either!

I have a 2006 Saturn Vue V6. When I put on my left turn signal my lights on my radio, odometer etc. blink. When my headlights are on they seem to work fine. Help

Sounds like a bad ground somewhere. If there has been any repair work done recently, look in that area first for a wire that may not have been put back on.