Choose a Year for your Oldsmobile 's Clutch 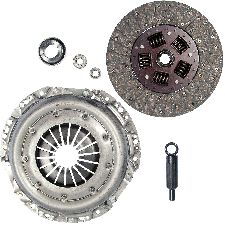 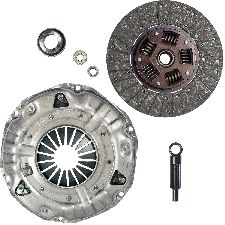 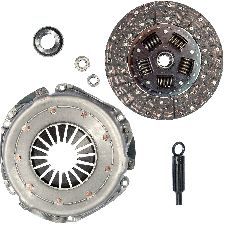 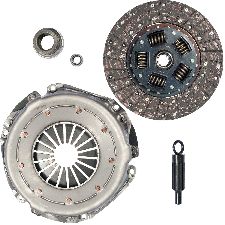 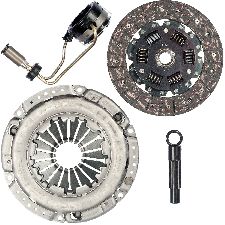 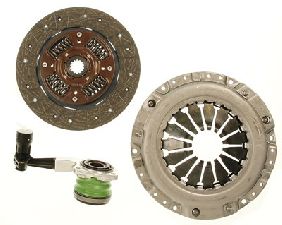 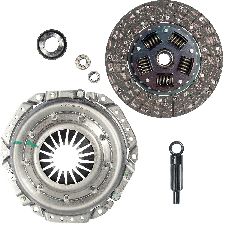 I have a 1998 oldsmobile intrigue 3.8l and the transmission has a trouble code - torque converter clutch solenoid stuck on. I need to either replace the solenoid or clip the wire on the connector that has the control signal to the solenoid. I decided to replace the solenoid, which requires dropping the trannny, so I started taking it apart. One of the bolts holding the tranny to the engine is impossible to reach without pulling the entire engine out of the car. I have been trying to reach that bolt for a month and a half. I have bought every tool known to man, and the bolt is just not reachable, without pulling the engine, and pulling the exhaust manifold. I bought an alldata subscription, and the bolt is bolt #6 in the procedure, and it just says "take it out" like it is no problem, it is the lower transmission bolt on the rear facing side, and all the other bolts go through the transmission, and thread into the engine. This one goes from the engine side and threads into the tranny. I contacted alldata tech support, and they just gave me my money back instead of dealing with a procedure that wont work as far as I am concerned because the bolt is impossible to reach. I have worked on cars all my life, done everything, I am not some idiot working over my head. I am at my wits end. I will pay money for anybody that can tell me how to remove that bolt without pulling the engine, or can tell me the wire to clip on the connector to disable that solenoid, and I will drive it without the torque converter clutch and I know it will reduce my gas mileage, but at least the car will be usable.

go through the passenger side wheelwell with some long extensions coupled together and its no trouble at all to remove.

I tried that and didn't have any success. Can you give me any tips on specifically where to shove it through there? Do I want to go straight through, up where the power steering pump is, or come in from further back, behind the power steering pump? Everything is so tight in there I can't see anything, so any specific tips would be great.

It is a tight spot for sure. Not easy to get a light in there either. I used a universal joint on my socket and managed to get at it though. The trick is to use enough extension to get the ratchet in the wheelwell. Its not fun for sure, and much profanity later it was taken care of.

Thanks for the help. You were right. I had to take the power steering pump off, but once that was off, it was a straight shot. I actually didn't even need a universal joint, just about 2 ft. of extension. Thanks again.

no problem. glad you got it out

My 1972 Vista Cruiser is giving me a hot indicator light. I started cheap replacing the thermostat, and then the water pump, and lastly a radiator the other day. The light still came on (when I stopped for cash at an ATM) but went off once I got moving again. Is there something else wrong? Is my engine blown? Half of the time the coolant spews out when I get home and shut the car off. Though it hasn't done it since I put the radiator in on Saturday.

Pretty tough engine so you may be ok even though it's old. Since it seems corrected with new radiator it probably just didn't get enough heat transfer with old one AND do check the fan clutch if equipped. I think only cars with A/C had a clutch - if no A/C from new could be fixed in speed of engine all the time.

It's been hot you know that. Use no more than 50/50 antifreeze/water. Check that idle speed is ok too as you could still fuss with things in 1972. Slightly (don't go nuts) higher idle gives better circulation of coolant, better oil pressure and fan is faster.

Man do I feel old!

Car Shuts Down After A 30 minute ride

the problem happens after i run the car for a wile. It shuts down when I hit the brakes. It shakes and it just shuts down. I can start the car back up emidiatly but as soon as i put it in a gear it does the same thing... i have to w8t 10-20 minutes befores it can move again.

i have done some test on it to try and figure out the problem:

for example i noticed that when i start to hit the brakes and it starts shaking ready to shut down, if i hit the gas it will stop shaking and keep moving, i also noticed that if i slow down really gradualy, like taking a long distance to slow down it wont shut down.

my father says its the brakes, that they are locking up.

the way it shuts down is like when you dont hit the clutch right on a manual (it shakes and kills the engine)
when its running normal there dosent seem to be any problems with the trasmision because when its running the grears seem to switch correctly.


so far i have switched the trasmision filter and oil, switched the engin oil, I even got a new breakbooster(i think thats what its called? it is a big ball with 4 lines going to each break, it also has the breakfluid resourvour on top of it)


by father says its has something to do with the line from the breakbooster that lead to the engine. something about suction or pressure killing the engine.

thank you in advance for your replies.

I think Kev is right on this. Another thing you can try is driving with overdrive off and see if it stops doing it.

there were several transmissions used this time period- try to answer question in my post.

A thought - the TCC control runs thru the brake light switch - It is actually several switches in one, a easy place to start-

if in neutral it does not shut down, only when i put it indrive. so yes i can put it in neutral and stop the car but not luck when u try to take off

im not shure what kind of transmision i have but it apears to not have an over drive.

It has to have overdrive. That's what a TCC solenoid does.

first thought is the TCC - try this as you stop shift to N neutral - I suspect all will be good until you put in D Drive and try to accelerate. Let me know if I have it right.

PS- if you know which transmission? 3 sp W OD ?, maybe the engine will help ID which model trans - get you some detailed tests to perform

from all the searching i did it does apear to be the Torque Converter Clutch.

it seem a lot of people are having the same problem

i tired to look at the auto zone website for this (my dad has a shop were i would be able to change it) but they dont have the exact thing, all they have is a Transmission Torque Converter.

im not shure if that is what i need or not.

1997 Oldsmobile Aurora - Will not catch gears.

Showing 2 out of 2 Posts
Question From phoenix9590 on 1997 Oldsmobile Aurora - Will not catch gears.


Problem
Hello, i have a 1997 Oldsmobile Aurora. Heres my problem, A few days ago i believe that the transmission was having issues. While in 3rd gear about to switch into 4th the car started jerking and fluxuating rpms. Like it was trying to switch to 4th but it wouldnt, although eventually it would if i layed off the gas for a few seconds. That problem persisted for a day or two. Now when i put the car into reverse or drive the engine moves inside the bay a little, it will go into gear. however the gear refuses to catch. I can get the car going a little bit but i have to rev the engine to about 4,000rpms to even make it move an inch. The car will not go past 25mph. Its almost like driving a 5speed while holding the clutch in half way.

Heres the weird part, I had a leak in my vaccuum line. One of the rubber connectors was split and was leaking a little bit of air. So i taped it together and put rubber adhesive on it. It dosent seem to be leaking any air. After i patched the vaccuum line i left the house and literally 10minutes into the drive the explained above problem started to occur.

My car has 165k miles. Everything else is in good condition. I bought it from a person that clearly took care of it.

I have tried changing the transmission fluid and transmission filters. The filters werent that dirty with minimil metal in the pan when i pulled it off.

So the question is, Would it be my Torque converter(as most people say it is) Or could it be the vaccuum line? Would a vaccuum leak cause this problem that i am having.

Thanks for the read, hope somebody can help me before i spend money taking it to a shop when it could be something easy.

Most of the time a trans slipping that badly will burn the fluid but who knows? My guess it is "Game Over" for that transmission,

1938 Oldsmobile shift lever on column is broken. Looking for one that someone may have taken out performing a conversion and tossed in a box. The car, 4 door sedan, has AST transmission (manual/automatic w/ clutch). Shift lever moves clockwise/counterclockwise. May be common part with1938 buick/pontiac/chevy but not 100% sure. The lever is a pot metal casting with button on end of lever. The button moves a rod in the length of the lever which moves a release detent to allow reverse/park. The casting cracked inside the steering column housing and attempts to repair it have failed.

Someone here may know of a specific source but I think you will be needing a place that can make up or fix what you have for a 1938.

A great resource for places, parts, and whole vehicles I think is still strong and I'll let you Google it out is called HEMMINGS MOTOR NEWS based out of Bennington, VT. Not sure now how they do biz but was a phone book of stuff for the old car hobby that I think is still sold in some places that would sell magazines. Ads will have web sites for what they have or do world wide.

I think you'll need to find a place that can fix what you have and really doubt any NOS parts would be out there,

There is one one on ebay right now