Finish Selecting Your Vehicle to Shop For Your Wheel Bearing Assembly

Choose a Year for your Cadillac 's Wheel Bearing Assembly

We stock Wheel Bearing Assembly parts for most Cadillac models, including DTS, DeVille. 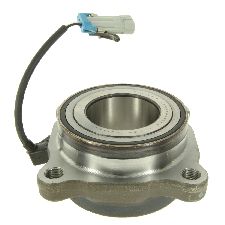 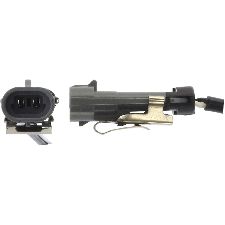 This is likely a wheel speed senor. It may not be setting codes due to the sensor not going far enough out of its parameters for the electronic brake control module (EBCM) to recognize a fault but enough to set up a false ABS activation.

The wheel speed sensors on this vehicle are an integral part of the wheel bearing assembly.
If a wheel bearing is beginning to fail and become slightly loose (you may not feel the looseness by hand) that during a turn the bearing is allowed to tip slightly; due to the weight of the vehicle pushing on the bearing.
If this is whatâ€™s happening; the air gap between the sensor and the reluctor (trigger) ring opens or closes up; changing the sensors output.
The EBCM thinks itâ€™s seeing a wheel slowing down, faster then the others and becomes active in an attempt to bring it back inline with the others.

With the use of a scan tool, set up to read wheel speed sensor speeds; a technician might be able to pick out which wheel is causing this?
Iâ€™ve also have had to use a lab scope connected to the individual sensors; road test the vehicle, while monitoring the sensors real-time wave pattern; when a scan tool was to slow to pick out the fault.

On a last resort you could start changing wheel bearing assemblies until you find which is causing the problem but that can be very expensive.