Finish Selecting Your Vehicle to Shop For Your Thermostat

Choose a Year for your Chevrolet 's Thermostat 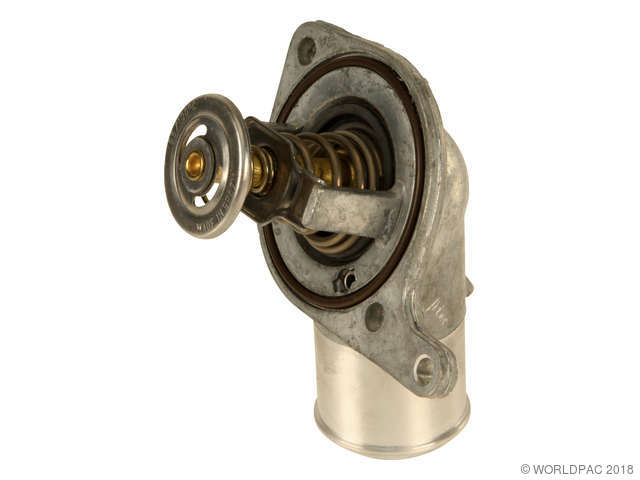 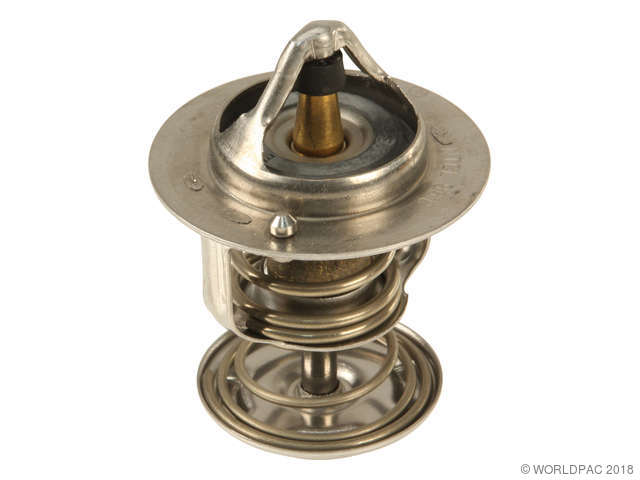 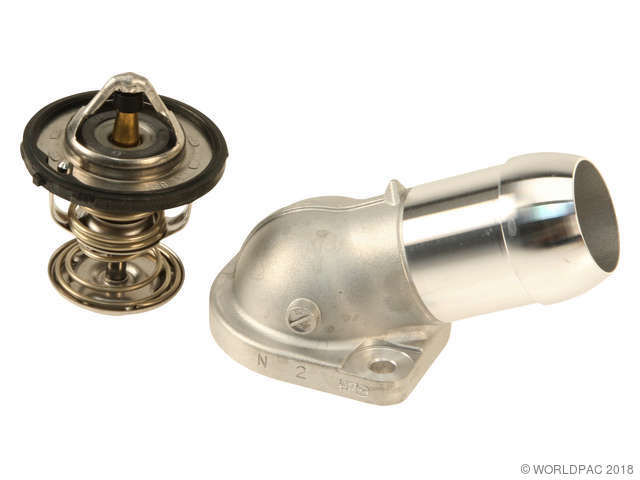 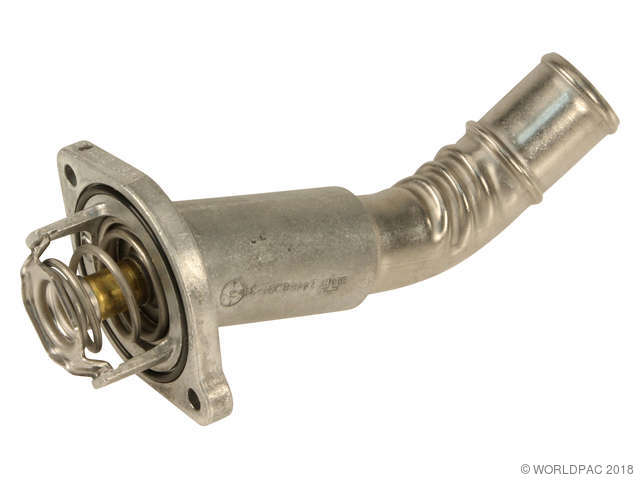 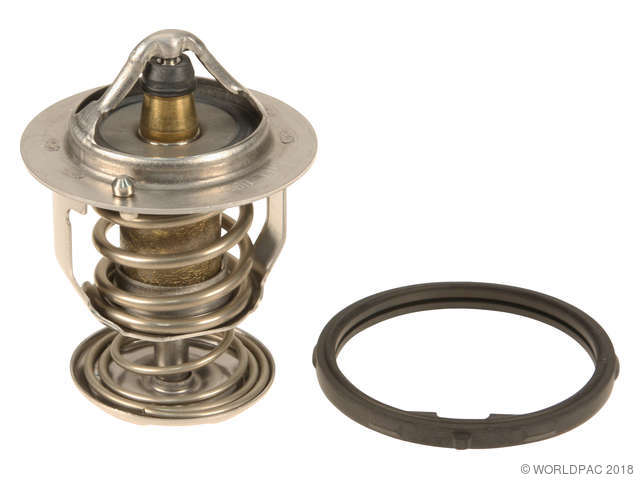 Started running hot a few weeks ago. Had never changed antifreeze - needed bad - a lot of sludge. Flushed with commercial product and replaced antifreeze. No problems for a few weeks. Started running hot the other day, so I replaced the thermostat. First run was ok, then next day started overheating again and the needle was fluctuating a lot. Would go up and down, fairly quickly. Yesterday, replaced the heat sensor. First run, no problems, held a steady 210 degrees. This morning 72 degree temps outside, started running hot again, got up to 230-240 degrees, then went back down while driving. Drove home this afternoon, 90+ degrees outside, and stayed at a steady 200-210 degrees.
Should I replace the thermostat again? I have no leaks anywhere, (and water pump is not leaking). I have never drove the car hot. I have stopped everytime it has ran hot and turned it off. Antifreeze is 50 - 50 solution. Any advice would be greatly appreciated.

If this was loaded up with Dexcool sludge then you likely haven't flushed it sufficiently. It takes a lot of flushing to get all that stuff out of there. The best way is add some more flush to it and run it for a while and then remove the thermostat and the upper radiator hose and run the engine with a hose in the radiator feeding it fresh water. Your going to have to be careful where you do this too because the coolant will stain the ground and kill animals. Keep running it until it runs clear and put the thermostat back in.

Have 2007 Chevrolet HHR and have a temp gage not working as well as my a/c compressor,have checked fuses,and ok,now I have relays to check(don't have meter) please advise

Do you have a test light that reads both power and ground?

you need to get it scanned - YES even if the CEL is off...
ECT is in thermostat housing - might want to check is it plugged in or any damaged wires,

the temp gauge issue MAY inhibit AC operation- computers are smart that way.

I will state with the exception of just the one time it has not overheated, it doesn't seem to get up to heat at all.

First we replaced the top hose that seemed to have a very small leak. It never overheated for this one.

Then we replaced the radiator (which developed a very nice leak) which was the only cause for it overheating.

It went along for a couple of months without issue, then started not warming up again until it wouldn't get much past the bottom line. Took it back to the mechanic and he said water pump, so I had him replace the water pump.

Other than to correct the leak, this did not solve the problem so replaced the thermostat (bought a fail safe one), that worked for about 24 hours and it's not warming up again. I do not seem to be losing any coolant and due to the weather am not sure if the exhaust is white or not. also makes it a bit difficult to do the cardboard at the exhaust test.

My mechanic says it's a blown head gasket, but I am not seeing anything that says blown gasket, I did google head gasket symptoms, it doesn't run rough, it doesn't seem to be leaking, it's not overheating (quite the opposite)

Here is what it is doing, temp is not getting much above the 100 degree line. Heater is not putting out warm air at all. Occasionally it don't want to start the very first time (not sure if that has anything to do with this, but since it does do it I will mention it). I am at my wits, not to mention my wallets end. Any suggestions would be welcome.
Thanks, Nancy

Would this cause the temperature gauge to register nothing?

If it worked after the thermostat was replaced i would
be looking at the thermostat again..
I'll bet if you remove the T-stat you may find that the FAIL SAFE Stat
Is stuck open...these T-stats are terrible for this...
Had a few do this...i don't use them...go get a Regular 'Stant' Brand T-stat
Pep Boys is one of the chains that sells them...stay away from Autozone Fail Safe stats.

I took it elsewhere for a 2nd opinion and it was indeed the head gasket. I was really hoping not, but there you have it. ~sighs~ Thanks for all the suggestions though.
Nancy

Actually, you are hijacking this thread. That would be a question to pose under general discussions under its own thread. But these engines actually run quite well without major problems past 100,000. The difference is people quit bothering to look under their hoods anymore. People won't check their fluids. If they do look at a gauge its only because 3 lights and a chime told them to shut down the car. Even then they run the thing til it dies. Car manufacturers advertise things as maintenance free and the buyers think this means they never will fail and never have to be looked over. Any moving component car and will fail.

No, I said if your only complaint was lack of heat. You may have air pockets in the system from either having a leak somewhere or never getting all the air out in the first place.

1991 blazer steam from hoses and radiator

1991 Chevrolet s10 blazer tahoe 4.3 4WD 4Dr with rebuilt engine.
started smelling antifreeze, all
the sudden the next day my engine bay was
billowing with steam. i looked at it and the steam was coming from the
radiator, the hose on the radiator and from the
hose on the engine plus it sprayed antifreeze on
the engine, which im assuming is what caused so
much steam.

I tightened the hose clamp on the engine and put more antifreeze in it and checked for leaks, let the engine cool down and started it back up and it did the same thing after the engine heated back up.

from what i was told it has a new thermostat and i was going to get the radiator but wasnt sure what it was. i will get my friend to pressure test it.

Sounds like you need to have a talk with whomever installed that engine if it was just done recently. The quality of their work seems to be lacking.

the engine rebuild was done over a period of time and the shell sat for about a year with the auxillary parts exposed to the elements. could it be the heater core or the radiator? im hoping its just not in the engine.. not sure i trust their work either. might just ask for my money back

You may need to pressure test the coolant system to find out exactly where your leak is coming from.

I'm having a problem with my 2005 Impala LS overheating. I took it to a Firestone Auto Care shop and they did a diagnostic test on it. What they told me was that i need to repair or replace my radiator, change thermostat, replace radiator cap, and they recommended that i changed the radiator hoses in a few months. I took my radiator to a radiator repair shop where they checked for leaks and cleaned the radiator out, then i put the radiator back in and replaced the thermostat and radiator cap. It still overheats though. The temperature gauge fluctuates a little while i'm driving and if i go up a parking garage the temperature gauge need goes almost up to the red zone. I would really appreciate any help

If you have the ac turned off and it is running hot, are the cooling fans running on high speed? Do they ever cycle off?

Did you remove the radiator cap and make sure there is enough coolant in the tank after the engine has cooled down overnight? Did you pressure test the system after the radiator repair to make sure you don't have any other leaks?

Yes, if i have the AC turned off it still runs hot and the fans switch on when its hot and then turn off after. I did check the coolant level again and it was full still. I didn't pressure test the system because it costs $90 each time where i live. Firestone never said they found any leaks so i dont know.

If you have the ac turned off and it is running hot, are the cooling fans running on high speed? Do they ever cycle off?

Yes, if i have the AC turned off it still runs hot and the fans switch on when its hot and then turn off after.

These fans are designed to run at two speeds. High and low.

If the fans come on and then go off while the engine is idling with the ac off, your not overheating. If the fans are running full blast and never shut off and your gauge is getting into the red, your overheating.

There could be a problem with the gauge. If you had a scan tool, you could monitor the engine coolant temperature. Fans on those will kick on low speed around 217 degrees F. If the engine temperature gets up to 230 degrees F, the PCM will turn the fans on high.

You can also use a laser thermometer aimed at the base of the coolant sensor to see if the temps jive with your gauge.