Choose a Year for your Plymouth 's Tail Light

We stock Tail Light parts for most Plymouth models, including Neon, Voyager. 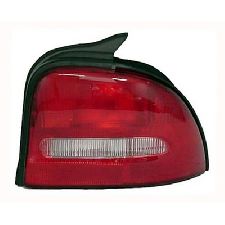 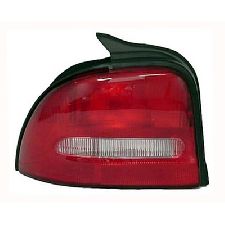 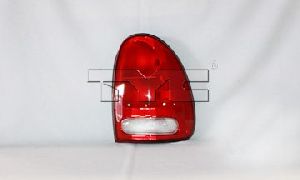 Ok, so here's what happened: last week I was rear-ended and my tail lights were completely destroyed. The car still runs, but I can't drive it without functioning tailights.

So this is my question: Is it possible to attatch a new set of lights? And if it is, where do I buy them?

I would begin my search for original light assemblies at the local auto wreckers (salvage yards). A 93 is getting old and the yards may have crushed a lot of them but you may get lucky and find a set?
Iâ€™m sure you could fit a set of universal trailer type lights back there but itâ€™ll look like crap.
If the wrecker is a wash you could try a search on Ebay?

This only took about a 2minute search; I donâ€™t know if this is what you want or need but with a little refined search with all the particulars I bet you can find what you do need?

Thanks for your reply. That trailer light option sounds pretty good. I found this item on Ebay: http://cgi.ebay.com/ebaymotors/UNIVERSAL-STOP-TURN-TAIL-BACKUP-LIGHT-REAR-REFLECTOR-BN_W0QQitemZ260112305576QQihZ016QQcategoryZ33716QQrdZ1QQcmdZViewItem

Would it work to hook that up to my car? I don't really care how it looks, as long as it'll work okay.

Yea those are the lights that I was talking about; all I know is that Uncle Jed would be proud. LOL

hey guys needing some help read tons of forums bout dash/running lights not working ect but none helped so im working on a 1990 plymouth horizon, the problem is the trail/running lights an dashboard lights are not working when the headlights are turned on.The fuses an bulbs are fine an i tried 2 new light switches just to make sure it was not a faulty unit an they did nothing for it. So was thinking maybe a wires touching or bad connection an what not but what blows my mind is when i push the light switch an the headlights turn off BUT before it clicks to let me know the lights are off their is a sweet spot were the dashboard lights an running lights work properly! I can even use this dimmer switch to adjust the brightness of the dashboard but only at that certain spot, i tried tightening the female connector that the light switch plugs into cause they were a little loss thinking it could be something that simple but did not help at all. Im completely in the dark on this one guys any advice would be greatly appreciated!
Thanks
James

If they are new then they could be bad switches, it happens.

Maybe one of the guys could post a wiring diagram of the circuit for you. Just find the circuit that power those lights and see if you are losing power or ground when the switch is on & which one you get back when you go to the "sweet spot" , that will tell you which circuit is giving you the trouble..

they were new switches from the box that why i said i tried a few ones at the store since the new one i bought did not work they let me try 2 new ones+ the one i bought before hand to see if it would work.But since the running lights work(sorta) that rules out the simple stuff right? like bulbs fuses the switch an possible the ground? Thanks for the replies guys if you all need any other information just let me know im out messing around with it as we speak.
James

If you can manipulate the switch and get the lights to work normally, something is wrong with the switch.

Was the original switch that would do that,and it would only turn on the running lights right after the head lights went off an before it clicked to let you know the headlights were turned off so that how i came to the conclusion the switch was bad the new ones would not work like that an i currently have the new one installed just cause im sure it needed it everything on the car that i know of is original, but i figured letting you all know that the old switch would turn the running lights on at that certain point would give you a better clue of what the problem is cause at the moment im completely in the dark ive got no idea were to go from here.
James

If you can have a diagram, see what wire goes to the running lights off the switch and check that wire for power when the switch is all the way on and then when you put it in the spot that makes it work. Is there 12v on that wire both times or only in the sweet spot?

Ok so i tested the volts with a multimeter were the light switch hooks into an when the running lights are on the Solid Green wire has no juice, an when the headlights are on the peach, solid red an black an white stripped wires had no juice.i tested the running lights too in the back an obviously they had juice when it was in the (sweetspot) but none when the head lights were turned on. I dont have a wiring diagram but is there a way to jump the wires of one that has power to another safely an see if that would make the headlights work with the running lights on or vice versa?

I really can't find a good diagram on this...

Check your connecter, there should be a tan wire that has 12v with the key on.......There should be a black/yellow wire. This for the rear park lights. If you have a fused jumper, you could jump between those 2 terminals & the park lights should come on

link deleted not allowed its chassis wiring fig.25-26 at teh bottom closest one to my 1990 horizon. But hey man i really appreciate you taking your time to try an help me out!
James

Like I said just double check all the fuses to be sure.....A test light would be good or use your voltmeter......make sure there isn't more than one box

Check all your fuses again.....I believe that one should have a 5 amp fuse for it

Sounds like you got a run of junk switches.

Are you using new switches or used ones? My local O-Reilly shows 3 different brands of switch for this, price range of $19-$29.

I was driving down 95 for about 800 miles, turned on the lights as itstarted to get dark, and about 40 minutes later i noticed the interior lights for the dashboard went out, while hearing the fuse blow. i stopped at a gas station later on and changed out the fuse with the same amp capacity, as soon as i put the fuse i put hte fuse in i seen a light flash, and took the fuse out and it melted one prong of the fuse, and also blew the fuse. I tried again, this time with the car off, and dash lights off, put in fuse, and nothing, then as soon as i turned the dash lights on, the fuse blew again. I tried this maybe 4 times until i ran out of fuses. Then i just said screw it, its only the dash lights, and started driving south.

so after getting to my destination i played with it a bit. This has been happening a lot with another fuse, the cig lighter fuse, but never to the interior/tail lights. And for some reason the tail lights are connected to the same fuse as the dash lights. I didnt think this was by default so i am assuming the previous owner might of rewired, or messed with the electrical system a bit, not sure.

Now the weird thing is the cig lighter is right next to the dash lights in the fuse box. So i figured maybe there is a foriegn object in there thats metal, connecting two terminals together that shouldnt, and maybe a burned wirer or something, i checked but its so compacted, i could not see anythign abnormal near the fuse box.

I called someone, and they said it could be a short in the wires, somewhere. Now currently i am on my honeymoon, and i dont want to spend the cash to fix the car at a garage, i would rather rig it to work quickly and get home. Otherwise, we were just planning to avoid driving during the night, until we get home and fix it then.

I was wondering what other options i have for a quick fix, or diagnosis for why this might occur?
Thank you for your time.

EDIT 2:
before i left, i noticed the front turn light bulb was out of its socket, and just lying in the light case, as my turn signals were flashing twice as fast, i put hte bulb back in its socket, and the turn signals, stopping flashing faster than normal. I am not sure if this is relevant, but i figured i would give as much info needed regarding recent things electrical.

i beleive i might of found the gremlin. I was googling for a bit and came across some solutions, 1) oversized bulb, wire short, or bare illumination stereo wire. And sure enough it was the bare illumination wire. I wire capped it, and the tail lights/dash lights stayed on. So hopefully that was the problem. I also saw a bare section of wire of the hot to the cig lighter, so i figured that could be tthe culprit, so i electrical taped around that. So maybe these were the gremlins. Luckily it wasnt something else, easy access, and fix.

I suggest you start carrying a fire extinguisher if you're going to do that.