Finish Selecting Your Vehicle to Shop For Your Power Steering Fluid

Choose a Year for your Kia 's Power Steering Fluid 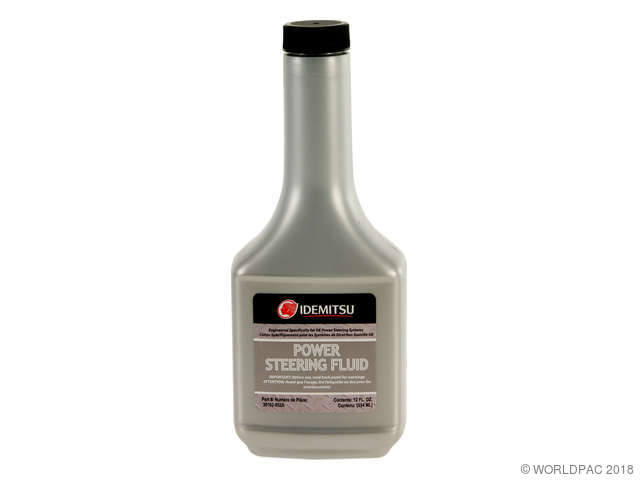 Current Problem: Abnormal sound coming from steering and/or under hood close to steering, noticeable when driving less than 40km/hour and more pronounced below 20km/hr and when rotating the wheel coming to park or slowing to junction, also note this "clicking' humming" "irritating sound" comes and goes after every 5-6 seconds at speeds 10km/hr to 20km / hr BUT sound completly dies off when accelerate past 30k upwards..but returns when slow down to gear 2, gear 1 and similar change in speed below 30km/hour.

Would appreciate your thoughts on this problem. Thanks!

Are tires and brakes ok? Are wheel spash shields rubbing? Will the noise move if you rotote tires?

This probably needs to be looked at by another shop and an alignment is called for with all that work done,

Had my car checked Tom.

Ruled out the splash shields as car dont have any.

Alignment - Yes!. Will be the next thing that i do.

Tires are old- Dont know how long the front tires are as I bought her second. But they look okay. a bit worn though.

Brakes had em checked before. what could be the problem here as last time checked the brake pads were sufficient thickness.

Havent rotated the tires ( when jacked up i assume) yet. will get this done later this week..

I'm a "redneck geek" of sorts, just getting off my first major repair work on my car (so just knowledgeable to be stupidly and incredibly dangerous), and I've got a leak that I can't identify (either location or type of fluid).

Background:
I had to take the cylinder head off in order to drill out (yes, *drill out*) a broken spark plug that had apparently welded itself to the cylinder head and would not budge using an "easy out." (Fun, very exciting issue: breaking tools, four-foot breaker bar, etc., but not the subject of this post . . . .) Anyway, I tore everything down to the engine block (intake and exhaust manifolds, power steering pump, alternator, and even the pre-cat just for fun), fixed the spark plug issue (drilled out, rethreaded, and installed a spark plug helicoil), resurfaced the cylinder head (probably would have been fine, as it was still within spec, but I did it anyway, just to be safe, and because it was already off), cleaned all mating surfaces, installed new gaskets and cylinder head bolts (properly torqued to Chilton's specs), and put everything back together. After refilling and double-checking all the fluids, I performed a dry compression test on the cylinders (175, 170, 170, 155 psi 1-4 respectively), installed the spark plugs, and took her for a test drive. She drives nicely.

Problem:
She sounds and feels like she's new until she gets up to operating temperature, then I get a rough idle (that increases in "roughness" the longer she's driven) kind of a like a slowly pulsating shimmy-shake about once a second or so. Never happens until she's up to temperature though, and as long as we're moving, she still feels and sounds beautiful. After we stop, she shows a pretty severe leak of something from somewhere (apparently behind or under the intake manifold). It doesn't smell like fuel, doesn't feel or smell like oil, doesn't look or smell like coolant, it gets all over the underside of the car, all the way back to about two feet before the tail pipe, all over the passenger side of the firewall, and extends into the passenger side wheel assembly, but everything left (driver's side) of the intake manifold is bone dry. Plus, it never happens if she's driven only a short distance where she doesn't get up to operating temperature, and after she's cooled down, she won't keep leaking. To me, in all of my un-edumacted lack of expertise, it seems like power steering fluid.

I'm not finding any coolant in the oil, oil in the coolant, or a drop in oil or coolant levels. I am noticing a *small* drop in my power steering fluid, more so than might be reasonably explained by a cooling of the engine, but not necessarily enough to correspond to the amount of fluid that's leaking out. It's not condensation, as it doesn't evaporate, and it's still clearly visible as a nice dark shiny liquid all over the underside of the car and inside the engine compartment (as previously described) after she's been sitting overnight. I'm also finding traces of fluid (not a lot) on the alternator/water pump V-belt, but none on either the AC/power steering pump V-belt or the timing belt. I replaced the crush washers on the high-pressure power steering pump banjo fitting, and rechecked all of the hoses that I could identify to make sure they were properly clamped. I'm not finding any indication of leakage from any hoses or on the visible mating surface seams of the cylinder head with engine block or manifolds. In other words, I cannot yet pinpoint a specific location from which anything is leaking.

One final thought . . . . I don't think she's leaking while I'm actually driving. I think she starts leaking after I've shut the engine off, as after she's been sitting for 10 seconds or so (maybe a little longer, but not much), she'll start steaming (from what I believe is the leaking fluid contacting the hot engine surfaces), and the steaming will significantly increase for about 60 seconds, and then subside, but she doesn't steam at all while I'm driving or idling.

I'm somewhat at a loss (though that loss may be more related to my lack of expertise than an easily identifiable problem).

Thanks for your thoughts!

We really can't tell you what is leaking because we are not there to see it. First you need to determine what kind of fluid it is. If it is all over the back of the engine, you need to clean it off. Then get it up on a rack and let the engine run while you watch to see where the leak is originating from.

As for the drive-ability issue, is the check engine light on? Might need to look at some scan data while the engine is idling rough to grasp an idea where to look for the issue.

That's part of my problem. When I'm looking at it while it's running, I see no active leak. All I see is the fact that the liquid's there. I've cleaned it off to see if I can tell where it's coming from, and when I go to check it again, it's just kind of magically returned, again with no indication that I can see as to its source.

Really, I think that checking, cleaning, and rechecking may be the only option I have, unless you possibly could guess at some potential sources that might make sense, and then I could specifically check those more closely.

Regardless, I'll be checking it again tonight when I get home.

As for the check engine light, no, it's not lit. But I do have an OBD scanner, and it comes up clear anyway (if for some reason the check engine light just wasn't working for whatever reason). However, I haven't actually checked the running data, so that's something I'll definitely check tonight as well.

Noise from front right passenger side

My car is a 2003 kia rio cinco station wagon (1.5 litres). Have had it for last 6 months bought it having hit 113,000km. Over past 6 months serviced and engaged repair work including changed the timing belt, idler and tensioner, changed front right wheel bearing and hub, changed spark plugs. Recently after a long trip (over 300km) most times just travel less than 20km daily to work and back, a clicking sound developed under the right drivers side wheel. Took it in to the same garage that changed the above and after examination changed the power steering high pressure hose ( due to leaks) and the tensioner rod bushings with new replacements. Also changed the power steering fluid and the brake fluid after replacing the rear wheel cyclinder washers. Back to the main issue. Theres an unpleasant sound coming from the front right wheel. After that long trip that I just mentioned the mechanics told me that the right cv joint was loose and they had it tightened and sealed. After that I went on a trip with a heavy load and my CV boot burst with grease splattering over the rim. Had smoke coming out of the front wheel and lost steering for a moment. I went back to the same mechanic and they replaced the boot and repacked the grease within two days and charged me for it. Two days later and when I turn right or left even if its just a slightly sharp turn I can hear popping or similar sound from that same right wheel. It doesnt seem right and from what I experienced with the loss of steering and all, am totally confused as to what to do. I asked the mechanic and he is totally lost. Can you help me please. Is it a bad wheel bearing, CV joint or malalignment by these mechanics. My children often accompany me on short rides and wouldnt want to put them at risk so have parked the car until i can have a professional have a look or several other mechanics as i have been put alot of faith in this one mechanic. Thanks.

Well I don't know the whole story and I'm sure things are different over in Fiji than here....

Here in the states the price of reman axles have got to the point where it actually better to just change the whole axle as compared to trying to repair one. Going off what you've posted, it sounds like you should change out that right axle.

Typically when an outer cv joint goes bad it will pop or click when the wheel is turned to the side the bad joint is on........ So if the right joint is bad, you would notice it most when turning right.....When they get real bad they make noise all the time.......

Excuse me Sir. what do you mean by changing out the whole axle. are you referring to the driveshaft..half shaft..(complete new cv boot and joint) I get confused with the wheel hub assembly. The noise i know you not here...comes from the right side only when I turn and load is out on that end. After some time observing its more like a grinding sound. if i turn my car softly theres no sound. I also did the reverse test of turning the wheel to the far side and reversing but no sound. its only when i turn.. Thanks alot for your input.

An axle is a complete halfshaft, complete with C/V joints.

Have since taken it up with the dealer who has advanced assessment to need for change of wheel bearings on both front sides and the CV joints as well. I think moving to do the left side is not necessary at this stage ONLY the right side needs work as the sound and history points in that direction.. Mechanic says isure fix is doing both sides regardless of the cost.What do you think? Here in Fiji it will cost approximately $1000.00 to do both sides. Given my budget I may have to cut that down to $500.00 and just do the right side with the professional and the other side in say 6 months time. If you care to respond. Have a good day!