Finish Selecting Your Vehicle to Shop For Your Mirror

Choose a Year for your Mazda 's Mirror 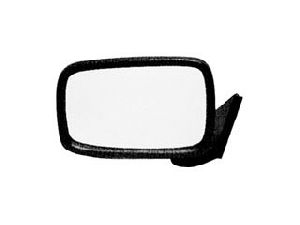 Looking for someone with instructions for removal of broken passenger mirror and install of a new one. Thanks.

Fasteners are most likley inside door and sometimes very hard to get at. If it's electric and perhaps heated there will be wiring which is also a PIA to hook up, They should train three year olds to reach some of these things!! T,

Muffler fell off of my car--how to fix?

Showing 3 out of 3 Posts
Question From jblane on Muffler fell off of my car--how to fix?

As I was driving home I went over a pothole and the muffler just fell off the bottom of my 1989 Mazda 929. I looked in the rear view mirror, saw it sitting in the street, and stopped to put it in my trunk and drive (noisily) away. So I still have the muffler and I'm wondering if it would be easy for a car novice like me to re-attach it, or if I'll need to go to a mechanic. The muffler itself doesn't look damaged, dented or anything. Thanks for any advice!

I would just go to a muffler shop and have them reattach it... Theres a reason the muffler came off initially and if you need anything related to your exhaust then a muffler shop would be more than able to repair it...

Not sure how that one is installed but would bet by now it's been replaced and just a muffler and tail spout. If a clamped one over the other pipe it will be hard to do without the tools as once installed they don't just slide on so easy without being stretched open where a clamp would make an imprint OR if this was bolted with a gasket type that may just need a gasket and the bolts.

By now it may not be exact original so I too suggest getting some help as the tools would cost a fortune for a one time thing unless you have access to them,

But then I decided to take a little drive through a Wyoming blizzard. Sparing the horror story of a Texan wedged between semi trucks in a pre dawn blizzard for 30 miles I'll just say that, at one point, I spun off the road.

It wasn't a bad accident I got going again pretty quickly but for the first few moments I was driving I felt like I was on a see-saw, my suspension bouncing up and down. Even after that wore off I could swear that every time I turned to the right my tail was sliding out just a little bit. From this point I had to drive over 1000 miles to get back home.

However, the worst of it was the grinding. Now, whenever I break there is a fierce grinding from the front axle. I also hear it to a much lesser extent at low speeds. It probably doesn't stop at higher speeds but is just over powered by the engine noise.

Finally, while I was driving the other day, I lost pressure in my breaks. It happened once then was fine, then it happened again a couple days later and was fine for the rest of the trip.

Any theories/ replacement costs would be much appriciated.

Howdy Tex! Welcome to Winter driving! Heck we can handle that here while talking on a cell phone, coiffing the "do" in the dimming vanity mirror and still have a hand to flip someone off!! Sorry - couldn't help it.

The snow on the side of the road can be just fluff or full of chunks of ice no better than rocks to your car. The first complaints that went away were probably packed up snow and ice in the wheel well which later melted but left its mark.

What probably happened is a dust shield to brakes got bent into the rotor and the flexible hose got torqued on badly with just symptoms at first then now probably a leak.

This has to get a brake and front end check and alignment. Tell the story so they will really look at the flex hoses or just replace them. They wouldn't be suspect so much with now missing snow.

This is a serious safety concern so don't wait. An alignment job alone could cost $70, brakes will be more if worn out and hoses and you'll have to ask when they find what has to be done.

Unfortunately, on my way to the garage to get my car fixed the breaks went out fully and I had to replace the calipers and everything. I should have stopped as soon as it started making noise but oh well. Thanks for the advice and now I have some of my own.