Finish Selecting Your Vehicle to Shop For Your Intake Manifold

Choose a Year for your Audi A4 Quattro 's Intake Manifold

We also have Intake Manifold parts for other Audi models, including A3, A3 Quattro, A4, A4 Quattro, TT, TT Quattro. 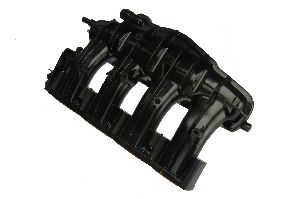 1996 lincoln town car with 4.6 engine. The intake manifold is leaking water. Are they know to give problems?

The mechanic I took it to said the manifold was cracked & that Lincoln had problems with these manifolds cracking .

Yes - just saw a plastic one cracked. Wasn't my job but looking at the crack it didn't look like any patching was going to last well. Big buck item too dammit!

Intake manifold cracks are common. I believe Dorman manufactures an aftermarket replacement for this engine because it is so common. Plastic is a terrible choice of manufacturing material for an intake manifold.

yea they have a coolant hose/tube under the intake. thats probably what your leak is coming from

Showing 2 out of 2 Posts
Question From naabob on vauxhall corsa c 1.0 2003 intake manifold

Hello, I noticed my corsa c 1.0 2003 wasn't able to tick over without stalling and after a quick look at the engine, I found all 5 intake manifold bolts have snapped. I have spend a few hours now looking for these bolts and have no clue what they are called or where to find them. I've been to scrap yards, and shops and have ran out of places to go. If anyone knows the names of these bolts or where to buy them please could you let me know.
Here is a picture of the bolt

I do not have the required Pully to remove the PS pulley!

What I have done in the past is just cut a notch in the bracket - just enough to get the bolt out and you should be all good! Once you put the a/c compressor back on you wont even be able to see it. Good luck!

Yes, you have to remove the A/C compressor to remove the intake, you can rent the tool to pull the P/S or purchase the puller from Napa, it is available through most tool companies such as OTC, Snap-On, etc.. it is a 2 piece half moon with an outter ring that holds the two halves together over the outter flange of the pulley, then the bolt in the center uses a centering bit that centers inside the pump shaft and presses the pulley outward and off to gain access to the bolts. The good thing is, that you can then loosen the bolts and ease the whole assembly forward as there is no reason to remove the assemmbly completely to gain acces to the intake bolts only an inch or two.

I just had an intake manifold gasket installed yesterday. Is it possible it could be leaking already and if so why would it be?

Yes, it is possible and one reason would be it was installed wrong. Could it just be burning off okd oil, gasket scrapings, etc?

I believe the job was done correctly. Work was performed by a well-trusted mechanic. Is it normal to for it to burn off that excess oil and/or scrappings after this type of repair? Is it possible something is just loose?

Let's start here- what kind of problem are you having and what vehicle-engine is it?

GM 3.1
The car had an external coolant leak. Was told it was the intake manifold gasket. Had it replaced, also replaced the thermostat, flushed coolant and changed oil (the works!). I saw a small puddle under the car this evening and am worried that it is still leaking.

If the drip continues, take it back to the people that repaired it and request a cooling system pressure test. Do not drive this if overheating.

They told me to bring it back in a week to check it out. What would they need to check out?

Did they tell you to bring it back when you picked it up or have you called them about this problem? Have you driven it since the repair? I the drip the same today or worse/better?

When I picked it up they said bring it back in a week just to check things out. Didn't notice any drips this morning. Hoping it's nothing to worry about.

I'm on your side- hope it's nothing to worry about! Just keep an eye on the temp gauge and don't let it overheat.

NO LEAKS! Car bone dry today. Stupid me, I think I saw a spot from before the job was done. I was just so paranoid.

Glad to hear it!! Never hurts to be safe and not sorry!! They may want to check the coolant just to make sure. Glad we could help.

Alright Here Is The Vehicle Information:

After removing the intake manifold to repair quick disconnect fitting I inspected the intake manifold gakets. There is no cracks or wear on the intake manifold gaskets. Is it possible to simply replace the manifold on the existing gaskets, and using gasket maker to guard against any possible leaks to avoid having to remove the rocker arms and push rods which would be required if new gaskets are installed? Has anyone been in this situation before and had experience with this? I know the by the book answer, but am looking for someone who can give me a realistic answer. Thanks in advance.

You gotta be kidding. You want to try to re-use a 3.1 intake gasket. That's insane. Probably the dumbest idea I've heard in years.

Thanks for the info. With the Manifold off I can see the pushrods in there, and the top of the gasket is behind the rod and the bottom of the gasket is in front of the rod. There is a curve in the gasket to accomodate the rod on the bottom. I can get the rocker arms and pushrods out, but dont want to go any further without knowing if I have to adjust the valves on this engine, or if I can just remove, replace gasket and bolt the rocker back in.

Yes, the pushrods have to be removed as they pass through the gasket.

Yes the rods pass through the gasket, but when the new gasket is installed and I replace the rod in the correct slot, can I just bolt on the rocker arm, and not worry about have to do some sort of adjustment on the valves?

Got the tool, and was able to replace the intake manifold. It has been a while but wanted to thank you for information I probably never would have received or thought of. The Van is working perfectly, no leaks, great idle. Thanks again for all the help.

Thanks so much for the advice, we are currently trying to find the tool now. Seems as if it's a little on the rare side. The places that we've called say they do not carry it. Any recomendations?

If you don't find the tool.

Would a valve spring compressor do the same job? I found one with a bar and a fork and a 45 degree angle at the end

Would a valve spring compressor do the same job?

No, that's a good way for one of the keepers to fall out and lose the valve into the cylinder. Then you would be screwed.

Every parts store in the country can get you that tool. Just because its not there that day doesn't mean its not in the warehouse and can be in the next day. Call some tool stores. Find the number for the local SnapOn, Matco or Mac tool reps in your area. Any shop will have their number. Call the reps and see if they have one on the truck and where their next stop will be so you can meet them there and buy it.

Here's one place to by it with a part number to search other places.

Sears lists one or more just for that tool #.

Couldn't guess if what you have will do the job or cause a problem?

Good luck with Sears lately if one close by. Here they are looking like they are shutting the doors!

You rotate the cam so the push rod's lifter on the base of the cam lobe and that cylinder's piston is down. Then use a crows foot and long handle ratchet on the rocker arm to compress the spring, so you can pop the push rod off. That way you don't have to adjust valves. They do actually make a special tool for that under $20. The tool works a lot better than the crows foot method in my opinion.

Cant get anyone to pick the vehicle up or show up for the gasket replacement.

Of course not. Why would any tech want to come to your house and take over the mess someone else took apart?
The big thing you have to watch out for is not to mix up the push rods. they are different length for intake and exhaust.

I had to remove it as I did have two people that were going to come by but never showed up, then called to reschedule and never showed up. It is our only vehicle, down for over a week, and being self employed that means our income stops, they told me what they were going to do so I got as far as I was comfortable, then they still didnt show up. Anyhow, I read that on some vehicles you need to manuallly crank the engine to get certain pistons at top dead center, then do something with the valves on 3 of the cylinders etc etc. But I also heard that on this engine you can just remove the rocker arms, replace the gasket, then replace the rocker arms. I also did find out that the exhaust and intake push rods are different sizes and to be sure the you keep all of them in exact order and replace them in the exact place they came from. But can I just remove the rockers arms and pushrods, replace gasket and put the push rod in the correct place, and simply bolt the rocker arms back on with no adjusting of the valves? Then replace the manifold and valve covers?

My realistic answer is I don't recommend it either.

That's like changing a baby's diaper, cleaning his/her's ass, and then sticking the old diaper back on.