Finish Selecting Your Vehicle to Shop For Your Exhaust Manifold

Choose a Year for your Oldsmobile 's Exhaust Manifold 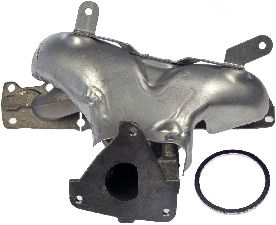 Hello everyone we just bought a 1964 Oldsmobile Jetstar 88 with a 330 engine with 67000 miles. We need to replace the exhaust and was wanting to know if we can go from single exhaust to dual exhaust. But the exhaust manifolds I have in my car dont look like they will work to change to dual exhaust. Can any one help please.

Google out and join this club. It will be tons of fun and resources for you. You will need manifolds and can get pipes made up nice or universal bendable pipe (haven't tried it yet) that is something like brake line so it bends better and looks better.

Another great resource always has been www.hemmingsmotornews.com

Thanks for your help we will ask the question there.

I have a 1998 oldsmobile intrigue 3.8l and the transmission has a trouble code - torque converter clutch solenoid stuck on. I need to either replace the solenoid or clip the wire on the connector that has the control signal to the solenoid. I decided to replace the solenoid, which requires dropping the trannny, so I started taking it apart. One of the bolts holding the tranny to the engine is impossible to reach without pulling the entire engine out of the car. I have been trying to reach that bolt for a month and a half. I have bought every tool known to man, and the bolt is just not reachable, without pulling the engine, and pulling the exhaust manifold. I bought an alldata subscription, and the bolt is bolt #6 in the procedure, and it just says "take it out" like it is no problem, it is the lower transmission bolt on the rear facing side, and all the other bolts go through the transmission, and thread into the engine. This one goes from the engine side and threads into the tranny. I contacted alldata tech support, and they just gave me my money back instead of dealing with a procedure that wont work as far as I am concerned because the bolt is impossible to reach. I have worked on cars all my life, done everything, I am not some idiot working over my head. I am at my wits end. I will pay money for anybody that can tell me how to remove that bolt without pulling the engine, or can tell me the wire to clip on the connector to disable that solenoid, and I will drive it without the torque converter clutch and I know it will reduce my gas mileage, but at least the car will be usable.

go through the passenger side wheelwell with some long extensions coupled together and its no trouble at all to remove.

I tried that and didn't have any success. Can you give me any tips on specifically where to shove it through there? Do I want to go straight through, up where the power steering pump is, or come in from further back, behind the power steering pump? Everything is so tight in there I can't see anything, so any specific tips would be great.

It is a tight spot for sure. Not easy to get a light in there either. I used a universal joint on my socket and managed to get at it though. The trick is to use enough extension to get the ratchet in the wheelwell. Its not fun for sure, and much profanity later it was taken care of.

Thanks for the help. You were right. I had to take the power steering pump off, but once that was off, it was a straight shot. I actually didn't even need a universal joint, just about 2 ft. of extension. Thanks again.

no problem. glad you got it out

I have a 1998 Oldsmobile 88 LS, 3.8L V6 with 78,000 miles. It started running ruff so decided to change spark plugs. Engine service light came on, took it to
Auto Zone to diagnose. Said spark plug wires needed changing. Got the back 3 changed, now do not know how to remove the spark plug wire channel in order to change the front 3 wires. Can somebody please tell me how to get the channel off? All advise is appreciated. I know there was a recall on this channel at one time but do not think they will honor the recall due to the age.

They will honor an open recall no matter what the age or mileage is.

You have to pry up the holder to separate it from the valve cover.

Thank you for the reply. I will heed your advise and call the dealer.

There is no recall on that issue nor was there likely ever one. Recalls are only made for 2 reasons... Emissions or safety and a spark plug loom wouldn't qualify for either. There may have been a TSB at one time but that is far different from a recall and merely an advisory to help the dealer

There actually was a recall for the front spark plug wiring channel on the GEN 2 3.8L. The valve cover would leak and the channel would fill up with oil. There was a possibility the oil could ignite from the hot exhaust manifold and burn the car to the ground. This fix was to eliminate the channel and install a couple of wire holders.

There was also another recall on the fuel pressure regulator that would leak and if the engine backfired on start up, which a lot of 3.8L do especially with low battery voltage, would cause the plastic intake to blow apart sending sharp plastic everywhere.

I don't know if the recall applies to this model, but it wouldn't be a bad idea to call your dealer and ask if there are any open recalls on your vehicle.

I just checked the recalls and there has only been one for that make and model and that was for a defective fuel pressure regulator.

I have a 1988 Oldsmobile Ciera 3.3 V6 with 90,000 that I have had for 3months, about 2weeks ago on the way home it loss power, and it sound like the engine was louder or a hole in the muffler, then by the time I got close to home it stalled then i couldnt start it, I let it sit for hour and it started i got about 2 miles and it stalled again...so i left it and come back the next day it took like 3mins to get it to start but i got it home....now if i try to start it its very hard some times to start and i have to give it gas to keep it running or it will stall. i cant get it going for 30mins-hours but it will start again" it has A knocking/clicking sound at the back of the engine, it still has a power loss and it gets kinda HOT. Ive drove it 30feet in 2weeks what do i need? PLEASE HELP!!! it also sounds like a gun shot some times when i try to start it, and it sounds like a bubbley noise from the engine I think.

Best thing to do when it won't start is to find out what you are missing. Fuel or spark? That will help narrow things down...

On this car after hearing what you said I think I might take a quick look at the exhaust system.... Also most sounds like a restricted exhaust problem.... After it's warm hook up a vacuum gauge & see what the reading is @ idle & then high rpms.... If the reading is low @ idle & goes to almost zero at high rpms you may have a restricted exhaust system. Being able to take a back pressure reading would confirm it. If not you can run it until it dies & then pop out an O2 or take the pipe loose from the exhaust manifold to see if it will start back up (yea I know everything is hot but no way around that)........

Thanks for your help so far" well this week I found one problem to be the air filter, it was really really bad plus weeds and a dead mouse in it...i know thats pretty bad! well after changing it the car starts up alittle better... i was even about to take it to the store, but if it warms up it will not start for hr the fan does work though. now when I drive the car it feels like its not getting fuel or something doesn't have any pull, it does not go real fast, it takes time to get it up to 15mph to 25mph it fells like to wants to stall and if i push on the gas to far it will stall out but will start up aslong as its not warm. All the spark plugs are sparking, and i think the catalytic converter may be clogged, the bolts are rusted and i cant get them off, so i will be putting a few drill holes in it to find out if that is one of the problems!...I took off the start of the pipe right after the exhaust manifold not sure of its name, the pipe that connects the the front 3 to the back 3 and goes to the catalytic, there are 6 pipes that come from the engine the front 3 and the back 3. the back 3 that still was connected kinda to the catalytic converter had the open end though that had black smoke coming out of the pipe, The front 3 showed no smoke from its end that was opened" this means what??? I'll try the vacuum gauge also

carproblem; The 'black smoke' is indicative of overfueling, which will destroy a catalytic converter. The saying is "Catalytic Converters don't die, they are murdered". Try removing an oxygen sensor before you start drilling holes. It will be noisy, but if your power comes back, you can be pretty sure it's a plugged cat. The vacuum test is another good indicator. The vacuum at 2500 rpm should be as great or greater than the reading at idle. But.....you need to address what caused the cat to go bad, in the first place, or you'll murder the new one...if that's the problem.