Choose a Year for your Suzuki 's EGR Valve 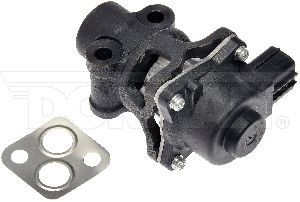 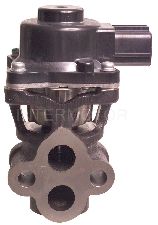 I have a 1999 Suzuki Esteem 1.6L 16 valve. 120,000 miles on it. I was getting the EGR Flow engine error code so I took off the EGR valve cleaned it up a bit and that fixed the problem for a couple of weeks. When the light came back on I replaced the EGR valve with a used one. Now the engine won't start at all with the old EGR valve or the new one. It turns over but won't start. If I spray some quick starter in the air intake it will fire and run for a few seconds but then die. I tried blocking the EGR valve altogether but there is no change. Any ideas?

An EGR valve won't keep an engine from starting. Granted, it may not run real good, but should run. Doesn't sound like you are getting fuel to the injectors. Look for disconnected or poorly connected connectors. Can't image how you'd blown a fuse or a relay doing the EGR, but worth a check.

Thanks, I don't see any problems with any connectors or hoses - the fuel pump relay does not seem to be the problem. Is there a simple way to tell if the fuel pump is working?

Well, the best and safest way would be to connect a fuel pressure guage to the fuel rail. Listen for the fuel pump running when you first turn on the ignition. Being hard of hearing, I'll stick a funnel in the fuel tank opening, hold my ear close, and have someone turn on the key (or have someone with some hearing left to listen). It'll only run for a few seconds, then shut off.

Update - problem was the fuel pump. I think it will spell the end of the line for this Esteem. Thanks for your help.

Hey everybody didnt see any posts regarding my problem so here it goes.

I have a 1997 suzuki sidekick sport 1.8l with 108k. Some months ago the car started having a rough idle. When ever i came to a stop light the rpm would fluctuate up and down and the car would almost stall out. It progressively got worse and the car did start stalling when at a stop. During one of the rough idling episodes i decided to turn off the car, wait for the stop light to turn green, then turn it back on. But when i went to turn on the car, it wouldnt turn on, in fact not even the dash lights light up. So i called toyota service (they do suzuki's in hawaii), and had them check it out. Turns out during all the rough idling shaking a hose had come loose and spilled ( i think power steerin fluid) all over the alternator, which fried it and i ended up running the battery dry. They also told me my computer was fried. Had all of that replaced and the car turned on but still rough idle. They told to change maf, did and no change, then iac, did also and no change, then they had the nerve to tell me that the whole throttle body had to be changed. I argued they gave me the run around, so i jus paid and got out of there.
I went for a 2 month trip, and while i was gone my friends was using my car. Turns out a oil leak started and the engine ran with very low oil for a while. I came home it was running horribly. Took the engine apart saw that a couple of piston rings were broken and had scratched up the cylindes. Had machine shop hone cylinders, install oversize pistons, and check head. Got everything checked and ready and put it back together. Car is running alot better almost to full power, but now the rough idling returned.
I cleaned egr valve, checked for vacuum leaks the propane method didnt find any( first time doing it so i am not sure if i did a good job at it). But visually inspecting all hoses look good ( no cracks). There was a crack on exhaust manifold and i put thermosteel on it. Seems to be holding and i cant feel and hear any air coming out. I did notice that at first car runs great and no rough idling, but once it warms up the problems start. Also when i reset the ecm things get realy bad.
Any help would be greatly appreciated, i have been trying to figure this out on my own without going to costly mechanics. Also the ecm pulls up a p0171 code, and a p0420 code but i dont have a catalytic converter so it think that is why.
i checked the voltage for o2 sensor and had a constant reading below .45V, which in the haynes book says it is defective. but when i really gas the car i shoots up to .8V. So i am thinking it is not defective but i just get a constant reading below .45V because the mixture is lean. right? and therefore i am getting the p0171 code.
Also since no codes for any of the sensors are coming up it is safe to say that they are working?
anyways hope somebody can help thanks
Julius

What is the O2 sensor voltage when your cruising or off idle? Can you monitor fuel trim % with your scanner?

i measured the o2 voltage with a digital multimeter, with car parked. When idling readings are .1V or below. Haynes repair book said to rev car and readings should fluctuate above and below .5V, but that doesnt happen it stays at .1-.3. But when i fully rev the car the reading shoot up to .8V. Through out the testing the car was rough idling. and i dont have a scanner to measure fuel trim.

You check to see if your EGR valve was stuck open? That one has an electronic stepper motor EGR valve. The only way your going to be able to tell if it is open is to remove the valve and see if you can blow through it. If the EGR valve is recirculating exhaust gas at idle speeds, the engine will run rough and lean.

i cleaned it out pretty good with carb cleaner. didnt try to blow through it though. will give that a try. any other suggestions ill get back to you in 20 min.
thanks

egr valve checks out. cant blow air through it

There has to be some sort of vacuum leak going on. It must be a pretty good size one to cause the symptoms your experiencing. You may need to swing into a shop that has an EVAP smoke machine. The machine pressurizes the intake with smoky air. Any leaks will show up by the smoke.

How are your power brakes? The wrong PCV valve can also cause a lean symptom or surging. Pinch off vacuum lines including the PCV hose and brake booster hose to see if your idle surge goes away.

okay thanks ill try pinching the lines. and for the smoke machine i did some web search and found that some people used fog machines(halloween kind) so i think im gonna give that a try. alot cheaper than going to a shop. and brakes work fine except for some squeaking but thats a diff. issue lol
thanks again

Hello, I'm having the same issue on my 98 sidekick. Did you find what is causing this? Thanks! Jonas

Please start your own thread with your own specifics and not tag on someone else's,

1997 Suzuki Sidekick JS 1.6l 4X4 manual, 120k
Throwing EGR code...managed to get it to smog last year but the light came back on...I'm kind of figuring that the shop did something sneaky to pass it. Anyway, I've replaced the EGR valve itself, have not replaced the SVS (on order; should have by 3/13/12) or the modulator (which is incredibly hard to find), and haven't been able to ream out the exhaust passage behind the EGR yet (I did find that someone had attached a bit of aircraft cable to a drill and sank that in the exhaust port but I'm a little hesitant. Anyone tried this?). My girlfriend bought the car from my parents knowing that it had the EGR code and that the problem hadn't been fixed and now after much crying, I have of course inherited the task of fixing it.

symptoms
1. car starts hard; doesn't like to keep idle at start up
2. loses power when gas is depressed (same thing that happens if you push the diaphragm toward the bell end of the EGR while it's running; I'm sure this is a clue, but I'm not a brilliant mechanic...)
3. related to 2, car barely makes it up hills because, of course, you have to add throttle and it doesn't like that.
4. rough idle when warm. It feels regular, so I thought it might be a bad hole, but they test good.

ANY help would be greatly appreciated. I like the car and I want my girlfriend to be happy with it. If all we can do is take it to a mechanic, that's a possibility. If anyone can recommend a decent mechanic in the Reno/Carson/Tahoe area, I'll check them out and we might be able to take it as far as Sac for repairs. Many thanks.

None of those symptoms have anything to do with a PO400 so you must have other issues somewhere.

Well.....for a whole lot of reasons, I'd like a second opinion.
'97 Suzuki OBDII reads PO400 exhaust gas recirc. and all of the symptoms point to possibly the diaphragm not working on the EGR or possibly the modulator and a number of other reasons down the line. I'm not a total novice, I'm just not a mechanic. So while I appreciate your having read the post, I'm going to have to hold off on your being the final authority.

Anyone else have any ideas?

I'm not a total novice, I'm just not a mechanic. So while I appreciate your having read the post, I'm going to have to hold off on your being the final authority.

Whatever you say Mr Wizard. I'll leave you to your infinite wisdom and EGR code.


4. rough idle when warm. It feels regular, so I thought it might be a bad hole, but they test good.

This is the only symptom that could possibly be caused by an EGR but judging by all the other symptoms you, I seriously doubt it.