Choose a Year for your Toyota 's Brake Drum 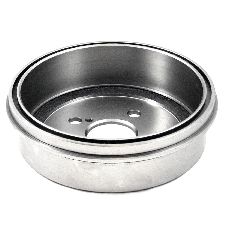 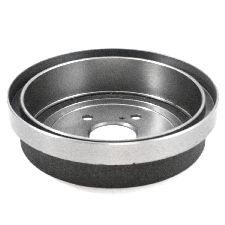 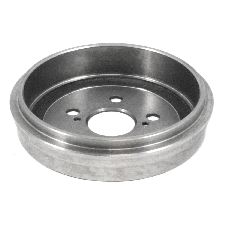 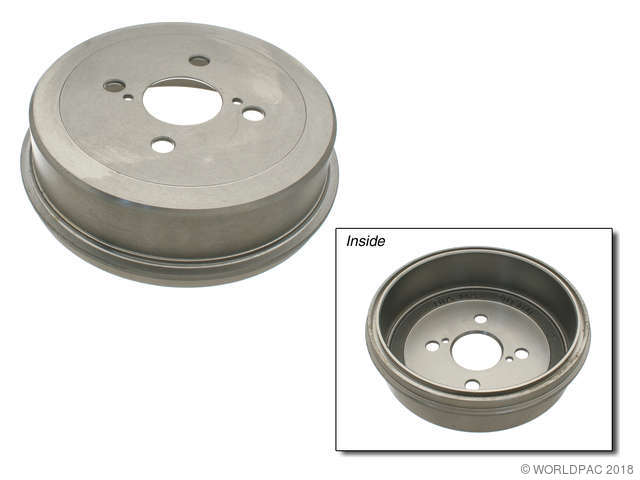 Any ideas?
I just bought this truck, and it was running fine during the test drive. The previous owner replaced the drivers side, rear bearings.
When I brought the truck home, it was good. But the next day, when I attempted to drive it, that rear wheel would not budge, so
I put it in reverse, and moved forward and it was good to go.
Occasionally that rear wheel would lock up, but also when I would come to a complete stop, the brake would catch and grab abruptly,
making that rear wheel skid out, and only that one wheel. The locking up is not as bad as it was before, but that brake still catches
now and then.

mudtwig; Remove the brake drum on that wheel. I'm pretty sure you'll find that the brake lining is saturated with gear oil from the axle seal leaking. If you're lucky, you may be able to clean the linings and brake drum with Brake Clean or denatured alchohol. Worse case, you'll have to replace the linings and clean the drum and backing plate.
(I'm assuming that it isn't wheel cylinder leakage).

Thanks alot for your reply, I appreciate it.....
Any idea, why this happened right after the bearings had been replaced?

Sorry to jump Loren. More than likely the previous owner did not replace the shoes or clean all the grease out of the drum or shoe lining. If the shoes were saturated, the lining would swell and could cause the problem.

W2O; Gosh, don't ever hesitate. Between Capt. Morgan and Maker's Mark, we'll figure it out!

I would pull the brake drum and look to see id in fact the axle seal has been replaced. If seal is new and dry, replace the shoes and drum. The rear endgrease will permeate the metal in the drum causing it to glaze and have no place for the braks shoe to grip.

Hey Loren, Sister and daughter like Capt. Morgan. Got Tom to try a little Makers also.

Sister and daughter like Capt. Morgan? Glad to hear that there's some class in your family! Just kidding.

You guys are too funny!

To add my opinion on gear oil on brakes: If that saturates the linings I've never found a solvent to really clean them out so new is the only route.

Gear oil in a drum on linings can shift between grabby to no friction - weird and makes a glaze that might need to be machined off of a good drum or replace them too. I swear some metal is porous enough to absorb some of the oil and really won't wash off well and machining might not last and start the issue all over again,

So it there a possibility, that this is not a axle seal leak?
Could this just be a messy brake drum?

When I went for a wheel alignment on my 1988 Toyota Tercel EZ hatchback, 1.5 l engine, with 62,300 miles, the service station said the alignment could not be performed because of movement in the rear wheels that indicated the rear wheel hubs were problematic. They suggested replacement.

Does this sound reasonable, given the age and mileage of the car? What if I did not have the wheel hubs replaced? Does/should the operation include replacing any bearings? How much labor (hours) should this entail? I will get 3 or 4 estimates.

I like this old, functioning, gas efficient, low maintenance Tercel, so please don't advise not wasting money on it.

I'm not sure what they found out of spec in rear of this but the rear hub is much like a common trailer on this with VERY inexpensive inner and outer bearings in each. They may need repacking and adjustment if still ok and very well could be.

Should be adjustable! Perhaps a tech didn't look close enough to know this shouldn't be using a sealed unit "hub" with bearing pressed in it type - look again.

Four of these in all. Not expensive and shouldn't be that tricky,

Thanks, Tom. I'm not up to speed in auto repair terminology, so I hope I can ask for clarification. If I understand, the whole hub doesn't need replacing; and a hub with bearings sealed inside would be the wrong type anyhow. What I need is either to have the current inner and outer bearings repacked and adjusted, or have new bearings packed. But even before repacking, the tech should try to adjust the bearings. Is that correct?

Right - this inner/outer bearing style is really not more than a brush trailer axle, small utility, boat etc., still used out there. Exact bearings are needed for each application of course. It's unusual to need all four sets of bearings and races to be done as matched sets as needed.

Simply spinning the wheel should be a good clue of bearing condition. Then - with wheel on you feel for "free play" - take dust cap off, cotter pin out and adjust - da de dah as all of those are done. It wouldn't hurt to repack them with new inner grease seal. The brake drum appears to be the hub so if terribly rusted the drum would need to go.

Once there is no freeplay the alignment reading is true to that wheel. If off by too much (judgement call by tech) the axle or something needs adjustment, bending, or possible replacement. If they're close but can't reasonably be brought into spec you can still align the car for good driveability and may have earlier tire wear on rear than you'd like but you could just make a habit of rotating the wheels a lot keeping them all even.

Note: The alignment equipment of today is highly accurate and takes ALL wheels into consideration not just the front. Unless ridiculous a happy medium should do if the rear are off and would need total axle replacement or too costly but still declared totally safe!

So in short - this is a serviceable hub/bearing deal vs sealed units that can't be adjusted or re-greased at all.

Do you have a printout of the existing alignment specs now? Machines now can print where it is and how much off making more clear with parameters of the range allowed for "perfect" on the sheet,

The shop did not give me the kind of printout of the alignment specs that I usually get after each alignment because they said they could not perform an alignment at all, given the condition of the "hubs". Though I haven't noticed any problem when I drive. But thanks again for the further clarification. Now I know what to talk about when I go back to shops for estimates.

To add a note; If the wheel bearings are bad, and have been run too long, it is possible that the hubs are damaged. If the bearing race has spun in the hub, the new race won't fit tight. But, removal and inspection will be required to make this call.

I know I'm beating this horse to death but this is NBD! The whole damn drum and hub with new races is just $28.99 ea. and use old or buy just the bearings needed if at all - can't say for low mile Tercel of the age - they didn't hold up well here against rust - not much does.

IT WILL SHOW FUNNY BELOW BUT THE DRUM IS THE HUB AS SHOWN:

You can check that yourself - it's direct from Autozone.

Something tells me with the age and miles it doesn't need more than a repack of rear bearings and then go for an alignment.

A repack is a separate service IMO. Just setting/adjusting them properly should be included in cost of alignments! Always was!