Choose a Year for your International 's Brake Drum 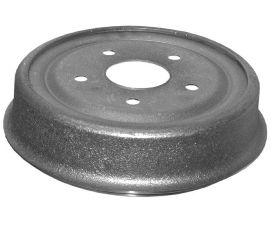 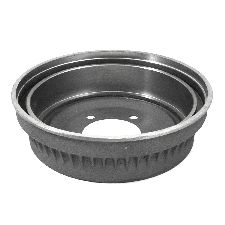 Hey all,
New to forum.
Just brought home a 1991 C1500 Chevy Truck I bought. 4.3L V-6 5-Speed
It has some issues, but the most important one at present is the passenger side rear brake drum is leaking fluid from inside the drum. I presume this to be a wheel cylinder issue. BUT, try as I might, I can't seem to remove the brake drum.
It is supposed to just pull off, right? This isn't just a tight shoe stuck, it's more like rust.
I've sprayed rust buster (Sea Foam's Deep Creep) on the lugs penetrations and the axle hub center. Pounded extensively and even pryed. Very little motion.
Any other tricks for getting the drum off?
That's when I thought I'd remove the entire axle by loosening the four bolts on the back side of the drum plate. Well, that didn't go as expected either.
Once loosened slightly, the bolts there just spin, and one now won't even re-tighten.
Think I'm stuck until I get that drum off. I need a sure-fire method of some kind.
Appreciate any help here.

You may have some grooves in the drum now. You'll have to access the adjusters and back them off enough to loosen the drum.

There are two oblong grommet inserts about an 1" long in the back of the drum plate. But, these are near the middle vertically on either side.

In the Chilton's manual, it shows another round hole for a push rod to disengage the parking brake tensioner, which I was able to do.

The other holes don't seem to be positioned for de-tensioning the adjuster(s) (are there more than one?). Isn't the adjuster across the bottom end of the shoes?

Or, are these oblong holes intended for that?
Kind of working blind here about what the internals actually look like.

Yes, those are the right holes. Use a small light to look inside the holes and find the star wheel.

O.K., thanks.
It'll have to wait until daybreak now since it's dark and outside.

Really appreciate the help, though.
Feeling pretty lost at this point.
Spent much of the day on a five-minute deal.
...and tired from it, too.

Finally got this done.
Thought I'd share a few particulars for future visitors
who stumble upon this posting.

The two oblong holes with the gromets are not for
adjusting the adjusters. And, as I first suspected,
there's only one adjuster.

I discovered a third hole in the back plate just forward
of the wheel Cylinder and down a bit. No chance to use
a flashlight on it since it's immediate background is the leaf
spring. But, it's that hole, closer to the top center which
is used for adjuster adjustment.

The adjuster wheel is left-handed threaded (at least on the
passenger side) so a top down motion of the away end of
a flat blade screwdriver tightens (spreads) the shoes. To
loosen them, the screwdriver motion would be down to up
at the away end.

As for the two oblong holes, these can potentially come
in handy for those, like me, who have a stuck drum.

The hole spans both a portion of the brake shoe and the
inner edge of the drum. A rod placed onto the drum rim
there, then, could be used for driving the drum off from
behind the plate.

It's also useful for checking to see if the brake shoes are
loose enough to not prevent drum removable (at least for
that reason). Pushing a rod through that slot toward the center
side will engage the shoe. Pushing on it will provide some
lateral drift of the shoe indicating it loose enough from the drum.

Also note for the C1500 V-6 4.3L short/wide bed truck, the wheel
cylinder is the 1-1/8" version since, apparently, there are several
sizes and no model association to determine which goes with
what model, at least at O'Reily's.

FWIW, today a wheel cylinder cost me about $12 and was
a complete unit, not just a rebuild kit. Just bolt it on, bleed
it and you're done.

You must have been looking at the shoe inspection holes. They are there to inspect how much shoe remains.

You must have been looking at the shoe inspection holes. They are there to inspect how much shoe remains.

That makes sense. I always thought they just pulled the drum to inspect shoe wear.

BTW, the shoes on this brake were like new. And, the drum was shinny bright, like it'd never been used. No grooves of any kind. The leak had apparently made this brake not work at all.

But, over extension of the cylinder rods would tend to push them out anyway. That might happen on extremely worn shoes, but wonder why it happened on what appear to be new shoes.

That would be an indication that the brakes were way out of adjustment but that doesn't jive with the problems you had getting the drum off unless someone stepped on the brake after you backed off the adjustment or after the drum was off.

That would be an indication that the brakes were way out of adjustment but that doesn't jive with the problems you had getting the drum off unless someone stepped on the brake after you backed off the adjustment or after the drum was off.

They may have been. Perhaps never snugged up after original installation. First use = pop the cylinder caps.

The shoes were never binding on the drum, however. That was just shear rusting, mostly around the axle hole and the face of the axle plate against the back of the drum. Took a bigger hammer to resolve. Then, just poped off normally, finally.

See, this "helps" sometimes.....
Re-reading my own post made me realize I never re-tightened those axle bolts on the backplate that wouldn't re-tighten yesterday. So, while I get to go through it again, I might have saved myself some grief later.